From the beginning of its inception, The Grind Pembroke intentionally avoided providing extensive food offerings to at-risk community members from its Coffee House except for church-sponsored dinners twice monthly. This decision was to avoid competition with the two well-operated soup kitchen already providing service to the at-risk population, and as well with commercial restaurants in the downtown area. Instead, the Coffee House offered a quiet, safe environment where patrons could relax and socialize over a hot or cold beverage along with a donated treat from Tim Horton’s Petawawa and later from Starbucks Petawawa.

All that changed dramatically at the end of March, 2019, when the Salvation Army, which had service those at risk in the Pembroke community for decades, suddenly and with only a day’s notice terminated all of its well-used community services, including its Soup Kitchen.

The Grind Pembroke and concerned community leaders and organizations immediately sprang into action and, by the day after the shocking announcement, lunches resumed from the Grind’s Coffee House during the period Tuesday – Friday with the understanding that, since the Grind did not have an appropriate commercial kitchen, the community mobilize to secure a permanent location and a sponsor. A Community Kitchen Task Force was quickly formed with members drawn from various churches and organizations such as the Society of St. Vincent de Paul, itself running a soup kitchen from St. Columbkille Cathedral Saturday – Monday, and a couple of local food banks, including St. Joseph’s Food Bank.

While lunches continued to be provided at The Grind’s Coffee House over the following months, the food served was prepared off-site and delivered to the Coffee House through the generosity of numerous churches, restaurants and other sponsoring organizations. All the while, the Community Kitchen Task Force, under the leadership of Deacon Adrien Chaput of the St. Columbkille Cathedral Conference, spent many hours meeting, planning and visiting potential alternate locations that were equipped with a kitchen and adjacent space for eating.

Unfortunately, no financially viable or space appropriate site could be identified, including the former Salvation Army building site, which itself required significant upgrades. Nor was the committee able to secure community commitment for oversight and continued operation of the Community Kitchen function to relieve The Grind of this burden.

At that point, at the risk of seeing this critical food service end, The Grind Pembroke agreed to take on permanent sponsorship of the Community Kitchen on the understanding that the Task Force continue to search for a more suitable location with a kitchen. Furthermore, The Grind indicated that any move of the Community Kitchen function had to accommodate all of the Grind’s services as it could not afford to operate two separate sites that were inter-related in terms of staff functions and patron use.

Having to rely on food being donated and prepared off-site, although appreciated, was not sustainable in the long-term. In fact, the donations of food began to taper off significantly after a few months operation at the Coffee House. Until a new location was secured, The Grind decided to make some temporary alterations to its Coffee House space to incorporate a make-shift kitchen but still without the advantage of a stove. Electrical modifications were made to allow the use of large electric roasting pans, additional freezer and refrigeration capacity was added, as well as more food storage and food preparation surfaces were incorporated into the space once occupied by an enclosed children’s play area used by visiting single mothers.

The search for new space ultimately led to an offer of space in the City of Pembroke’s old fire hall located at the end of Renfrew Street on the edge of downtown. After lengthy meetings and discussions, city council approved of The Grind leasing the fire hall except for one of three large truck bays and as of the beginning of May, negotiations are on-going leading to the signing of a lease. From that point, significant additional planning is required to determine how to effectively utilize the available space and then to secure funding for the required renovations.

Almost a year from the day The Grind Pembroke rescued the former Salvation Army Soup Kitchen, then the community was hit be another blow, this time a virus outbreak with global repercussions. As always, The Grind has adapted to the challenge and while health protection recommendations have forced The Grind, along with thousands of other organizations and businesses, to adjust their services to protect employees, volunteers, clients and patrons, the Community Kitchen service has weathered the storm. The way the Community Kitchen serves food and the timing has changed, but the important point is that Pembroke’s vulnerable population can still, with the continued operation of two soup kitchens and food bank, be assured of a basic food supply during these difficult times. It often takes adversity to bring out the best of people and situations. And so it is with the Community Kitchen. Enough volunteers have stepped forward to continue the food operation. In partnership with the Renfrew & County District Health Unit, the operation has further adapted to continue to meet food safety requirements. A stove has been added and additional washing and hygiene measures have been taken. As well, the government’s COVID-19 response has freed up additional financial support to allow The Grind to increase the amount of nutritious food required by our patrons. Due to the COVID-19 pandemic, the Community Kitchen provides a meal take-out service only. Refer to the poster to see how The Grind has responded to these needs.”

The Community Kitchen has become a popular and well-used service – in fact, The Grind Pembroke now serves more patrons than experienced by the Salvation Army when it operated its soup kitchen. Part of the reason is due to the more central location of The Grind as it now serves individuals living on the east and west end of downtown Pembroke. Between 2019 March – December, The Grind’s Community Kitchen served a total of 7,155 lunches. In terms of the Community Dinners held twice monthly during 2019, 1,017 people were served, a slight increase over the experience in 2018 (1,006 people). 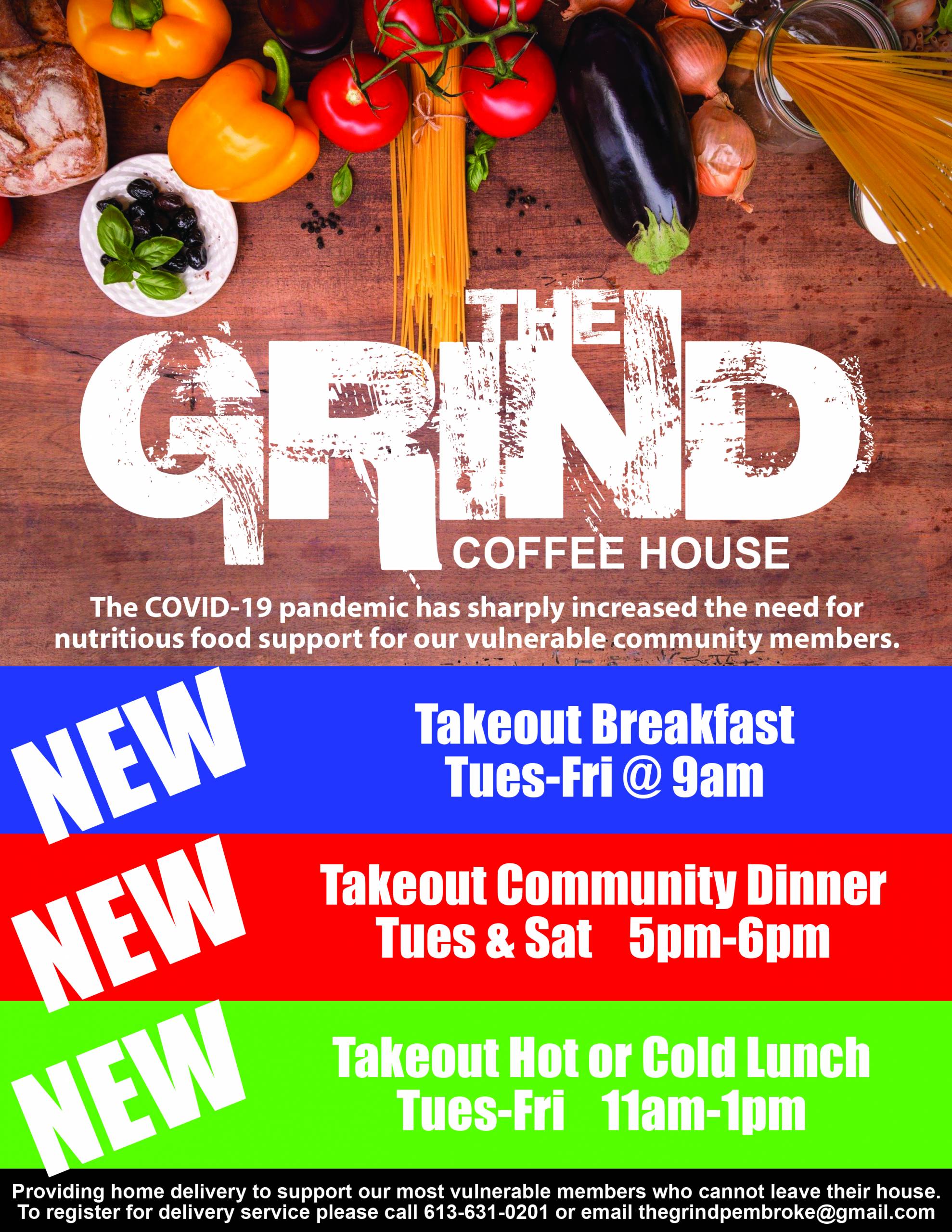